Borrow a copy from the Tri-C Libraries

Borrow a copy from OhioLINK

Borrow a copy from SearchOhio

Praise for Carry On

"Carry On is a surprising book, not only due to the tremendous hearts within these two young men, but because the failures and triumphs in their stories don't align with typical narrative rhythms. They arise suddenly, jaggedly, too often shatteringly, as occurs in real life. And as in real life, the moments of understanding, of healing, of unbounded joy will astonish you with the scope of their power."

A short video about Carry On 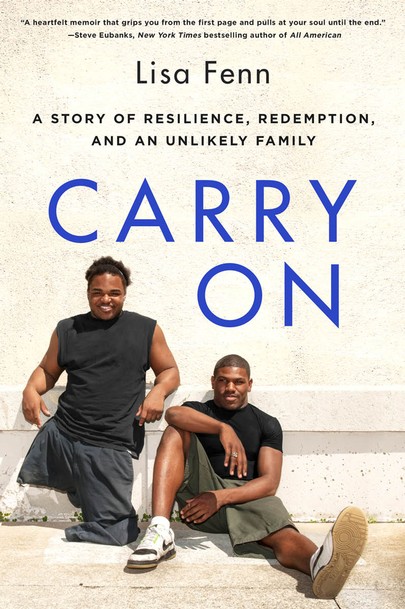 NAACP Image Award Finalist, and Winner of the 2016 Friends of American Writers Literary Award and the Christopher Award.

In the spirit of The Blind Side comes a deeply moving memoir about the unexpected bonds that would transform three lives.

Lisa Fenn produced human-interest features for ESPN for over a decade, but one particular story came into her life and never left. After seeing a newspaper image of two young wrestlers from one of Cleveland’s tougher public high schools, Lisa followed a hunch and flew back to her hometown to meet the boys that very day. What she found caused her spirit both to sink and to soar.

Leroy Sutton, who lost his legs in a childhood train accident, could often be found riding on the back of Dartanyon Crockett, who was legally blind and had no permanent place to call home. Initially drawn together by their handicaps, the boys soon developed a brother-like bond. When one wrestled, the other sat on the edge of the mat, and their cheerful friendship was a source of inspiration throughout the halls of their high school.

As Lisa filmed her feature about this remarkable friendship for ESPN, she grew to understand the suffering Leroy and Dartanyon had endured, and she fought for their trust and their confidence. The three formed a surprising and meaningful connection—and once the television story ended, Lisa realized she couldn’t just walk away.

Though Leroy’s and Dartanyon’s futures were limited by abject poverty, Lisa resolved to give them the chance she knew they deserved. She worked tirelessly to see them through school and athletic pursuits, broken hearts, phantom limbs, and the bewildering obstacles that, at every turn, tested their individual strengths even while strengthening the bonds between them.

More than a story of two underdogs overcoming innumerable hardships, Carry On is a touching tale of an unlikely family forged through barriers of race, class, and disability. It is a powerful memoir about grit, love, hope, and faith—and the courage to carry on, even in the most extraordinary circumstances.